New Novel Featuring Mrs. Buddha To Be Released This Summer

This just came in over the mindfulness transom: a novelization about the life of Mrs. Buddha. It sounds intriguing to me. 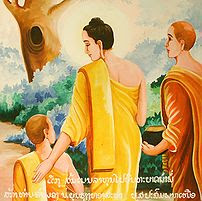 It is with great pleasure that I am sharing my book of historical fiction titled Buddha's Wife.

Buddha’s Wife is a novel about compassion, inspiration and forgiveness. Thousands of books, texts and stories have followed Siddhartha’s teachings and his path to becoming The Buddha, but little has been written about his wife Yasodhara, their son Rahula or their relatives and how they reacted to his leaving them sleeping in the middle of the night, without a word of farewell or explanation.

Buddha’s Wife tells a fascinating story, little known in the west, about the woman whom Buddha left behind. Gabriel Constans focuses the reader’s attention on the strong and complicated women who surrounded Buddha and makes us re-think the nature of spiritual life.
-- Chitra Divakaruni, international best-selling author and American Book Award winner, whose books include Mistress of Spices, Sister of My Heart and Palace of Illusions.

A remarkable recreation of Yasodhara’s life. It is very readable and engages readers in the complexity of issues many women have raised about Gotama the Buddha’s life and practice.
-- Katherine Thanas, Abbot, Santa Cruz Zen Center.

This book is an awesome read, insightful, woman loving - a challenge to all spiritual seekers to rethink, re-vise, and dream anew.
-- bell hooks, professor, activist and author of national bestseller all about love.

Thank you for your precious time and attention. I hope you find the story of interest. The book is only available from the publisher (Robert D. Reed Publishers), until its worldwide release this summer. You can order a copy right now and read an excerpt, at www.buddhaswife.com

I look forward to hearing from you.

Posted by RealFakeNews at 9:39 PM