A Little Buddhist Thought on the Economy 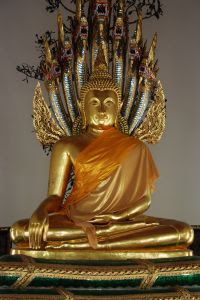 I try not to use Buddhism to make political points. One can be a Democrat Buddhist or a Republican Buddhist. I don't pretend to know what political party the Buddha would belong to. I'm guessing he'd be an independent.

But I came across a posting on The Middle Way that attempted to explain the economic mess we're in from a Buddhist perspective. Here's an excerpt:

The current global economic crisis is easily understood through a Buddhist framework. The institutions saw the world as self and other. They saw, and see, it as something to “win”. They focused on Profits and the Trickle Down Theory of economics.

Buddhism teaches us about no self, no other. It teaches us that the “I” thing we grasp isn’t real. It opens us to the world of interconnectedness and interrelatedness. That’s all well and good but the thing is, we’re here now.

I would distill it even further in Buddhist thought. We're in the soup economically because of a lack of mindfulness. We at the micro level and those at the macro level didn't pay close attention to economic decisions. When you make a bad or take out an ill advised loan, it's eventually going to come home to roost. Add a little karma to the mix--you reap what you sew--or for every action there is a reaction--we have some problems.

Just something to think about.

Posted by RealFakeNews at 2:08 PM