Dog Bites, Pitbulls, and the Power of Memories 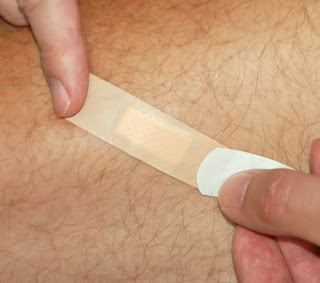 For some unexplained reason, this morning before I woke up, I started thinking about my dog Snoop and all the times the mean miniature poodle had bitten me when I was a kid.
It seems the dog bit me on a fairly regular basis, often puncturing my skin and drawing blood. His bites hurt like hell. I'm not sure why my family kept the dog around.

This memory then triggered a much more traumatic memory--the time I was attacked by a pit bull in 1985 in Garden City, Kansas.

I was a young TV producer and anchor at the local PBS station in Topeka, KS. I was out in western Kansas working on a documentary.

As my videographer and I were walking back to our motel room late one evening after supper, we had walked by a lady who had an unleashed pitbull in the parking lot.

As I walked down the sidewalk, I suddenly felt a burning sensation--then excruciating pain in my butt--and something clamped onto it. I started to scream and ran down the sidewalk as quickly as I could.

When my colleague and I returned to the motel room, my shorts were in bloody shreds and my right but cheek was covered in deep puncture wounds.

You might be laughing now about getting bit in the ass. Believe me, it was no laughing moment and I have never been in such pain before or sense.

I went to the emergency room at the local hospital where the ER doc did a perfunctory examination, did a half-assed job cleaning out my wounds, and sent me on my way. He neglected to tell me that I should probably start a rabies series.

I reported the incident to the local police who also could care less. Despite my colleague's and my clear descriptions, the Garden City police never sent an officer to investigate or take statements. The next day, the lady and her dog left early in the morning in a pick up truck.

Meanwhile, being about 250 miles from home, I figured I might as well try and salvage my trip and I conducted another day or two of interviews and shooting footage for my project.

When I returned home to Topeka, my wife Donna was aghast and told me to get me and my hamburgered butt to the doctor. As a young and healthy man, I didn't have family physician, so I went to a "doc in a box" urgent care facility.

No sooner had I told the doctor what happened, he was on the phone to an infectious disease specialist to get me started on a rabies series. While not as bad as in the Good Old Days, I had nearly twenty shots in my butt over then next several weeks.

And my ass was still sore. To this day, I still have teeth marks.

Back to this morning.

After reliving this dog bite, my right but cheek was throbbing. It didn't hurt like it did when I was bit, but it was a dull throbbing pain--like a felt 23 years ago for months after the attack.

I thought I understood the power of memory. But until this morning, laying in bed, thinking about Snoop, the pitbull, and my ass, I had merely scratched the surface of understanding.

Posted by RealFakeNews at 12:14 AM

I always thought those rabies shots sounded like a good time... Another fun one is the EMG I think it was called, to test for peripheral neuropathy. They keep administering electric shocks with electrodes hooked to various points on your hands, feet, arms and legs until you divulge state secrets or they find out you have neuropathy.