Using Science to Build Faith in Yourself 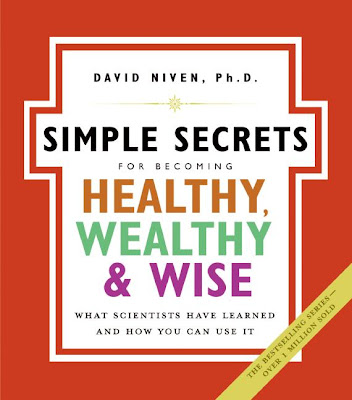 One of the things you hear in both religion and the self-improvement fields is that you "gotta have faith.'

Frankly, for many of us who are brought up on logic, argument, and facts, "faith" is a difficult concept.

Buddhism probably comes to closest to asking its practitioners to test their faith--or at least their philosophy--against facts, science, and reality.

On the other hand, if you don't have faith in something, life can be pretty bleak.

Fortunately, a little book I've come across might help those of you who are like me and can't take things on "faith" along.

Broken down into a short reading each day, Dr. Niven explains how a certain "faith" in a new attitude, or change in direction, or other means of better living has changed a person for the better or could help you.

At the bottom, however, he adds a sort of footnote that cites scientific, medical, or psychological studies that prove or at least suggest that the new attitude or "faith" has an empirical basis.

Lack of motivation is a handicap that can stifle a person's potential regardless of their strengths. If you do not want something, it simply does not matter how talented you are. Understand that motivation is the biggest asset you possess in pursuing your future.

Sam worked in the kitchen washing dishes at a restaurant in Fresno, California. It was undeniably the worst job in the place. "It was backbreaking work in unbelievable heat. The pace was always hectic, and when the dinner rush finally slowed, you had to face the pots and pans," Sam says.

Although only a teenager, Sam thought about the things he would do differently if he ran the restaurant. "The tile floor would get slippery as the night wore on, and we were always trying to come up with ways to keep the waiters from falling down, 'cause if they fell down, it was the dishwashers who had to clean it up," he recalls.

It was only a dream at the time—but little by little he saved what he could. He moved up step-by-step through restaurant jobs until he was running the kitchen. Twenty years after he started as a dishwasher, he opened his first restaurant, and within a few years he had four locations.

Sam, who won an award for the success of his restaurants, credits his outlook for his success: "It would not be possible without hard work, but it would not be possible without believing in it. If I didn't believe, I never would have saved. I never would have learned everything I could about the business. If you have persistence and confidence, you have a bright future."

Researchers found that the future career earnings of schoolchildren were four times more strongly influenced by personal motivation than by any other factor. (Russell and Atwater 2005)

On a personal note, I have found it highly useful. It hasn't (yet) made me wealthy, but I think it has made me healthy-er and wise-er.

And coupled with my study of Buddhism and emphasis on mindfulness, it has been a book a great insight.

I highly recommend it--and you don't have to take that on "faith!"

Posted by RealFakeNews at 8:46 PM

Hi Todd,
Just a hello from a mindful fan in Buenos Aires, Argentina! Yes, you are global. ;-)
And I totally agree about the motivation factor. As the mother of four daughters--ages 16, 17, 19 and 20--I know how important it is to instill a sense of not only awareness but AWAKENESS--and this means seeing challenges, watching your reactions, and being inspired to learn and lean forward into opportunities for greater growth.
Healthy, wealthy and wise? Oh, yeah. And fortunately, it doesn't take millions to be "rich"--it's all a matter of where you choose to be!
Cheers to you,
Maya
Maya Talisman Frost
www.Real-WorldMindfulness.com

Hello, just to let you know I'm very impressed with your blog and I want to blogroll you. I am not American; I am ethnic Chinese, and the recent surge of educated and freethinking American Buddhist blogs in the blogosphere is very impressive and heartening to me. My own website is http://buddhawarrior.wordpress.com so please feel free to exchange ideas and experiences of the Dharma with me and the guests online.

Keep up the good work!

Thanks for your kind words. I will be adding your blogs to my blogroll. Please feel free to link to me if you like.