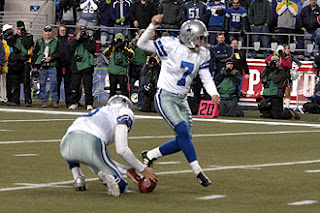 Point After Tries (PATs) and short field goals in the NFL are generally "gimmes." Everyone knows their job--the center, the holder, and the kicker in particular.

Except in Saturday's NFL Wildcard game where the Seattle Seahawks defeated the Dallas Cowboys on a botched hold on a short field goal attempt.

Tony Romo, the Dallas QB who got the starting job midseason and the PAT and field goal holder for a couple of seasons, bobbled the snap in the waning minutes of the playoff game. The snap was perfect. He got it in his hands. But FUMBLE.

The kicker couldn't kick, Romo took the ball and tried to run into the endzone, but it was a disaster.

The lesson is not to pile on poor Tony. He feels bad enough.

It is a lesson in mindfulness. No job is too simple, too repetitive, too easy. Even people at the top of their skills and profession can lose mindfulness.

Fortunately, in this instance, it was just a football game (unless, of course, you are a Dallas Cowboys fan).

But a lack of mindfulness can be much more costly on the highway, while operating dangerous equipment, or even in our relationships.

It is not that non-mindfulness can ever be completely eliminated. But we can always be more mindful about what we are doing.

Literally, for Tony Romo and the Dallas Cowboys, their season and its hopes were dashed between breaths--a life or lack of a future life all in an instance.

I like the way you tied Buddhism to a modern sporting event. The principles of Buddhism are timeless. I must say that I did enjoy the play though. :)w